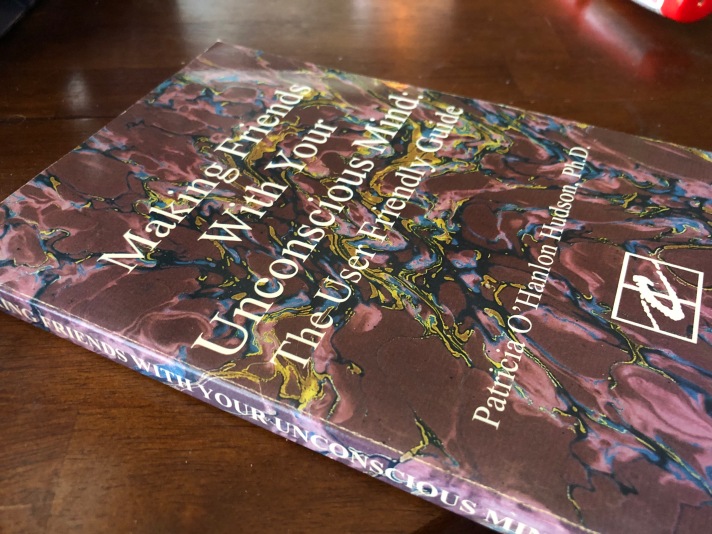 In “Making Friends With Your Unconscious Mind: A User Friendly Guide,” Patricia O’Hanlon Hudson wants us to think of our unconscious mind as a computer. It is a tremendous tool…if we know how to access its functions and use it judiciously.

Hudson makes the case that our unconscious mind knows things we don’t about why we do what we do; what we need; and how we can function better. She advocates learning to access our unconscious minds through self-hypnosis, dream interpretation, and intentional dream programming, and she lays out simple techniques for familiarizing ourselves with and harnessing the abilities of our unconscious mind.

Her techniques for inducing self-hypnosis are fairly straightforward; they would be recognizable to anyone who read the book I reviewed a couple weeks ago, Goldberg’s “Self-Hypnosis.” Hudson touches on progressive relaxation and visualizing relaxing places and situations; however, unlike Goldberg, she stresses that hypnosis is optimally induced via permissive “possibility” language, rather than directive, “you-will-now-feel/think/do-this” language.

Something that I like about Hudson’s book is that she treats the unconscious generally with gentleness and respect. Unlike Goldberg, who was fond of giving our unconscious commands to follow, Hudson’s interventions mostly focus on asking for our unconscious’s cooperation in telling us things it wants us to know anyway.

Examples of things we can ask our unconscious to elucidate for us include reasons why our behavior is blocked or why we’re behaving in self-sabotaging ways; clarifications of fears or anxieties; and assistance with shifting our emotions and behavior with less pain and internal struggle.

A unique feature of Hudson’s book is the focus on proactively working with dreams. There are reams and reams and REAMS of books on dream interpretation, many of which approach the subject from involved Freudian viewpoints.

Hudson here doesn’t do a deep dive into dream theory; rather, she advocates doing as much conscious thinking and writing about the problem as is practical, then intentionally asking our unconscious mind to keep working on the problem via dream states. Then, when we wake up, Hudson advises immediately jotting down what we can remember of our dreams (a widely advocated technique that has been shown to progressively improve how much of our dreams we can recall), and reviewing our dreams for “answers” our conscious might have provided (either obviously or symbolically).

Hudson goes on to elaborate on how we can use self-induced trance states to mentally “rehearse” dealing with difficult situations, or mentally prepare ourselves for life events or tasks.

Again and again, Hudson asserts that the key to effectively engaging our unconscious mind is to treat it with curiosity, respect, and deference. She emphatically states that becoming familiar with how the unconscious mind “talks” to us, and intentionally setting out to communicate with and draw upon the unconscious mind can provide us with perspective and resourcefulness we may not have even suspected.

Overall, I like Hudson’s approach to the mind. It fits well with my own therapeutic philosophy, which prioritizes forming a supportive relationship with one’s self (long-time followers of my work will remember my repeated assertions that you simply cannot bully  or shame yourself into feeling or behaving better– it just doesn’t work).

Likewise, I like the way she recommends thinking of the mind– as a computer that will work better and better the more familiar you become with it. I cannot tell you how much of my own work with patience centers around getting them to be less afraid and reluctant to look at and explore their own minds. We cannot, as it turns out, change something that we don’t understand well and/or are reluctant to engage.

The only glitch I have with this book is, we still don’t know– not really– what the unconscious mind actually IS.

We don’t know if it functions the same for everyone.

We don’t know how it works, or interacts with the physical nervous systems we human beings have.

Yes, it’s a great thing to become familiar with the workings of your mind; yes, human beings are responsive to suggestion and it’s important to learn how to frame and introduce suggestions to your mind in a way that will get results; but I think it’s also important to remember that, when it comes to “the unconscious mind,” we’re all just taking shots in the dark.

We don’t REALLY understand it all that much better than Freud did.

(I’m acquainted with at least one personal development teacher who claims, over and over and OVER again in his social media posts, that psychology “proves” that “90 percent” of what motivates us is driven by our “unconscious mind.” It drives me up a goddamn wall. Psychology “proves” no such thing. Either he doesn’t understand how psychological research works, or he doesn’t understand what “the unconscious mind” suggests to psychologists; either way, I’m pretty sure he only says it because he thinks it makes him sound smart.)

Overall, this is an incredibly accessible, constructive little book. Hudson’s suggestions on how to nurture concentration and relaxation skills are solid, and her suggestions for imaging and journaling exercises are well-thought out. Most people can benefit tremendously from developing the skills she discusses.

Just don’t expect your “unconscious” mind to do work that can, and should, be done consciously.

One thought on “Book Review: “Making Friends With Your Unconscious Mind” by Patricia O’Hanlon Hudson”